It seems that recently many close friends in my life are either currently pregnant or have recently welcomed their newest little one into the world. What a gift it is to have friends who are open to life and to see the fruitfulness of faithful Catholic marriages! Each time that I hear the news of a friend who is pregnant I am utterly filled with joy and excitement. I also fondly remember the gift of having Gianna reside within me, an experience that will forever change me. I would love to share with you all some of my experiences while pregnant with Gianna.

Upon finding out that I was pregnant I became deeply joyful. I was honestly thankful beyond words that God was gifting Adam and I our first child. It seemed though that very soon into my pregnancy the devil started to take notice of my joy. I have spoken with other mothers while they were pregnant and know that I am not the only pregnant mother that the devil has noticed. It seems that he uses this precious and vulnerable time of pregnancy to scare, attack, and try to take away the joy from the mother. Have you ever heard the story of when St. Zelie was pregnant with St. Therese?

When Zelie was pregnant with Therese “the devil attacked her. Zelie was pushed violently on the shoulder from behind. She called up to Heaven and asked for God’s assistance. The devil was immediately put to flight. It was his pathetic attempt to cause her trouble, to disturb her in her final months of pregnancy with this the last of her nine children. Her daughter who was destined to be a saint.”¹

Although most pregnant mothers will not have an attack quite like this the devil seeks other ways to disturb expectant mothers. Pregnancy is full of unknowns, especially for a first time mother. There were changes within my body that I had never experienced before, certain foods and drinks I had to avoid, the fear of losing my child while pregnant, and the fears of pregnancy complications, preterm labor, childbirth, nursing, and the list goes on.

“He [the devil] was a murderer from the beginning, and has nothing to do with the truth, because there is no truth in him. When he lies, he speaks according to his own nature, for he is a liar and the father of lies” John 8:44.

Sadly, my joy had quickly turned into fear. I honestly became terrified to lose our baby or to have something go wrong. I was especially afraid of childbirth. As I was weeping before a crucifix confiding to Jesus and Mary all these fears that had welled up within me the Lord lead me to read Matthew 16:23.

This verse comes from the story of when Jesus retells His death and resurrection. Jesus began to show His disciples that He must suffer, die, and ultimately be resurrected. Peter tried to rebuke what Jesus was saying. He was not thinking as God would, but in his humanness. This is when Jesus said these powerful words to him. “‘Get behind me, Satan! You are a hindrance to me; for you are not on the side of God, but of men’” Matthew 16:23.

There cannot be redemption without the cross. There cannot be new life brought into the world without mothers first carrying their little ones within their wombs. There cannot be new babies baptized without the mother first accepting pregnancy and childbirth even with the crosses she may take up. New saints cannot be brought into the world without mothers bearing them first. The expectant mother is participating in God’s work of salvation by giving her fiat just as Mary did. Mary gave the Lord her fiat, which unraveled the salvation for us all as Jesus entered into the womb of His Virgin Mother. The temple of a pregnant mother’s body becomes filled with new life as her baby develops and grows. God’s creative power taking place within the womb of a mother. Is it any wonder that the devil despises pregnant mothers?

The Lord made me realize that I was allowing the devil to frighten me causing me to think in my weak human ways, which were not God’s ways. Each time that someone told me a fear-inducing story, a fearful thought crossed my mind, or fear would well up in me I would immediately say out loud (or whisper depending on where I was), “Get behind me, Satan!” This greatly helped me to overcome all of these fears. This also allowed my joy to become even stronger. I continued to thank God often for the little one growing within me. I never wanted to take this beautiful gift of life for granted. I would often pray, “Oh, how I long to raise this little one for Heaven!” That is still my prayer for my little daughter Gianna.

There are two quotes that I meditated on for most of my pregnancy that were very encouraging. I tend to send them to other mothers when they are pregnant. The first quote was by Joseph Cardinal Mindszenty.

When I first heard this beautiful quote it actually brought tears to my eyes. Joseph Cardinal Mindszenty said this, “The most important person on earth is a mother. She cannot claim the honor of having built Notre Dame Cathedral. She need not. She has built something more magnificent than any cathedral: the dwelling for an immortal soul, the tiny perfection of her baby’s body. The angels have not been blessed with such a grace. They cannot share in God’s creative miracle to bring new saints to Heaven. Only a human mother can. Mothers are closer to God the Creator than any other creature; God joins forces with mothers in performing this act of creation. What in God’s good earth is more glorious than this: to be a mother?” God had given Adam and I a great gift of marriage, an immortal soul to guide to Heaven. How could we not be thankful for such a gift?

The second quote was from the readings the priest prays at Mass during Advent. While Adam and I were visiting my side of the family for Christmas my brother called us down to watch the Christmas Mass from the Vatican, which was being aired on television. At one point during the broadcast the camera focused on an image of Mary holding baby Jesus. The narrator said, “… the Virgin Mother longed for Him with love beyond all telling…” Many people had been asking me how it felt to be pregnant and to anticipate the arrival of our little one. I often did not have words to describe my feelings until I heard this quote. I longed for this little one, my son or daughter, with a love so great and deep. This quote sounded familiar and it turns out that it actually comes from the second preface that the priest reads at Mass during the season of Advent.

I hope that these stories from when I was pregnant with Gianna encouraged you! Pregnancy is a gift. My little daughter is unrepeatable and was fashioned by God Himself within me. She is loved dearly by Jesus. He Himself said, “Let the little children come to me, and do not stop them; for it is to such as these that the kingdom of heaven belongs” Matthew 19:14. I pray that I will continue to remind her of this often. That she may always know that she is loved dearly. I also pray that I will always be in awe of God’s creative power as He knits life within mothers. Life that is wanted, sacred, and cherished. Since the beginning of time God had Gianna in mind and He is entrusting her to Adam and I’s care during this specific moment in history! An eternal gift given through love to us from God Himself. Oh what a magnificent gift indeed!

2 thoughts on “The Virgin Mother Longed for Him: Reflections on my Pregnancy with Gianna” 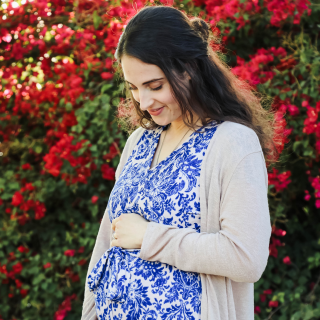